As one of the most bio-diverse countries on earth, Colombia is made up of an incredible patchwork of wildly differing landscapes and extraordinary natural beauty. From awe-inspiring mountain ranges to mysterious cloud forest, scorching desert and rugged, surf-spattered coast, here are eight of Colombia’s most awe-inspiring natural wonders. 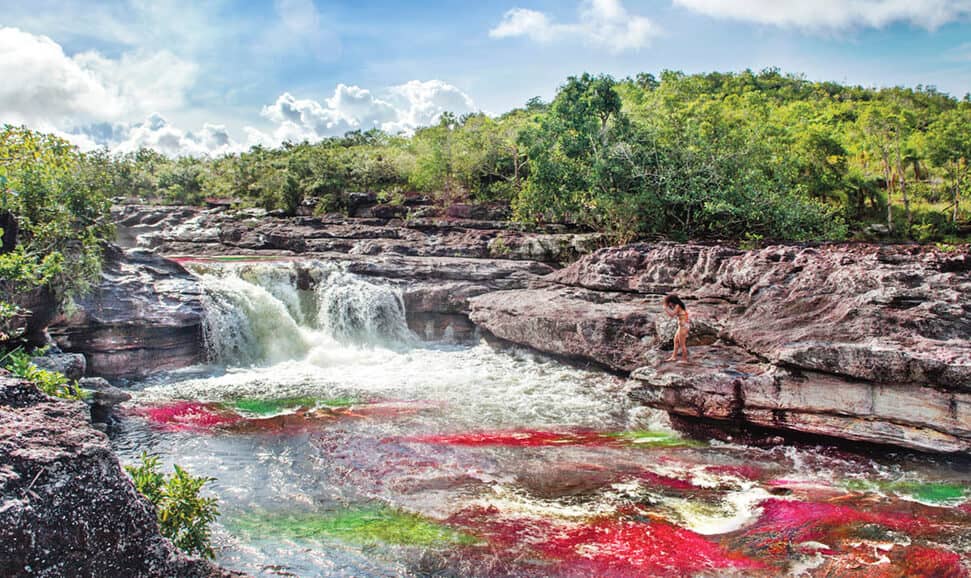 Deep in the dense forests of the Sierra de la Macarena National Park lies a river with a beauty so strange and unearthly it has been called “the river that ran away from paradise”. More co mmonly, it’s referred to as “el rio de los cinco colores” (the river of five colours), since for several months each year (usually between mid-May and early December), the pools and cascades of the Caño Cristales become liquid rainbows. Bursting with vibrant reds, pinks, yellows, oranges and greens, the phenomenon is caused by the blooms of the aquatic flower, macarenia clavigera.
In an isolated range, the Sierra de la Macarena is a vast, wild tract of mixed forest, tropical jungle, shrubland and savannah. Until the mid-2000s, it was a known guerrilla hideout and completely closed to tourists.
These days, tourists can hop on a direct flight from Bogota to the small town of La Macarena, and from there enjoy a half-day hike, boat and truck trip to Caño Cristales and the surrounding swimming holes and waterfalls. Guides are mandatory inside the park and are easily hired in town.
Hardcore dirt riders can visit Caño Cristales on a guided 9 day tour with Motolombia, but heed the warning: this one’s for expert off-roaders only! 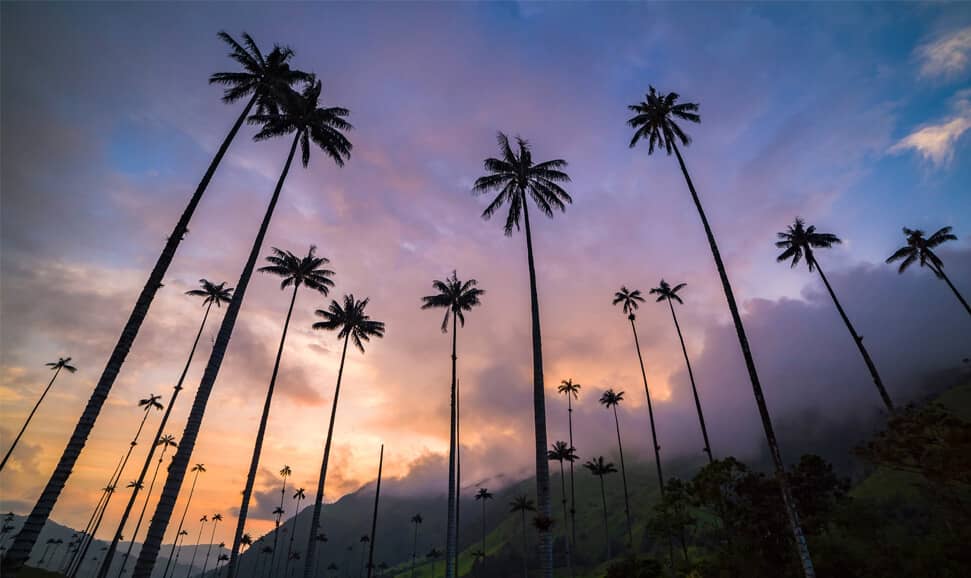 Beautiful scenery is everywhere in Colombia’s coffee region. Jade green mountain ranges, forested hills and verdant meadows abound. But one place in the Coffee Triangle stands out, not because it’s unlike anywhere else in the region, but because it’s unlike anywhere else on the planet.
Just east of Salento, the Cocora Valley sits in the lower reaches of the Los Nevados National Park, a broad, perennially lush valley framed by sharp peaks. What makes this valley, also known as el Bosque de Palmas (Forest of the Palms) is that sprouting out of the ground in every direction are the gigantic palma de cera (giant wax palms), the largest palms in the world and Colombia’s national tree.
Some of these strange, spindly giants (their smooth, cylindrical trunks are naked, bearing just a crown of leafy fronds at the top) tower an incredible 60m high. Seeing hundreds of these majestic trees scattered across this resplendent valley is a sight to behold. Measuring yourself up at the base of one of these behemoths and you’ll appreciate how truly tiny you appear in their presence. This is a rain-soaked region, and some days a thick, swirling mist descends on the valley. Some say the foggy weather makes Cocora even more beautiful, shrouding the valley with a mysterious, almost prehistoric air. 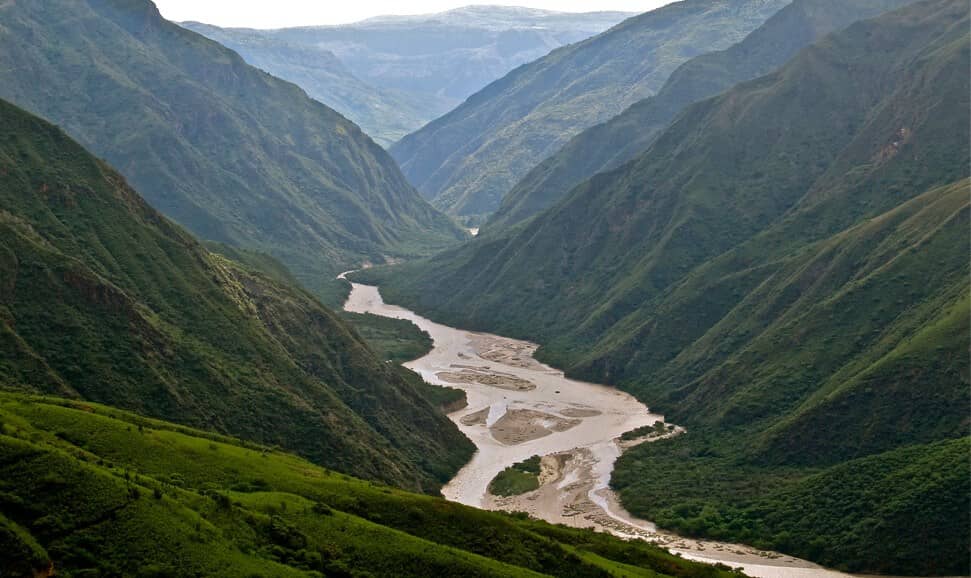 54 km south of Bucaramanga, Chicamocha is a bit of a sidestep from the typical Gringo Trail, but it’s a region experienced Colombian adventure riders know and love. The park is bounded by the spines of the mountainous chain surrounding the Chicamocha Canyon.
227 km long and around 2 km deep, Chicamocha is a lush and fertile canyon, with undulating slopes carpeted in emerald green vegetation. The Chicamocha River races along the bottom in a series of rapids, which have recently gained the attention of whitewater rafters. Being not so far from San Gil, Colombia’s ‘adventure capital’ a small adventure sports industry around paragliding, climbing and camping started offering activities within the park.
There are some great day hikes and multi-day treks within the park, but for motorcyclists, it’s the 50km, 45A Route from Piedecustra to Aratoca that makes this natural wonder well worth a detour. The road winds its way along the high ridges before descending almost to the canyon floor. For a remote rural Colombia road, its surface is almost unbelievably perfect. The curves seem to go on forever, and the views are something else altogether. 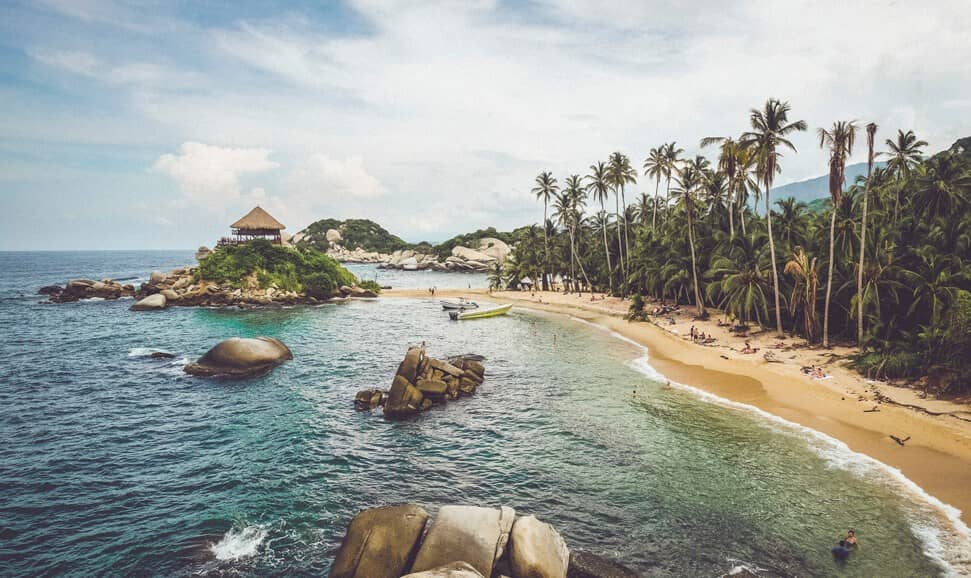 At its southern edges, the forests of Tayrona creep up the foothills of the Sierra Nevada de Santa Marta mountain range. At its northern boundaries, it meets the wide bays and picturesque coves of a rugged, undeveloped slice of the Caribbean coast. To many, Tayrona is the very definition of paradise. For a beach destination with sparkling clear water and idyllic, palm-fringed stretches of white sand, Tayrona has no equals in mainland Colombia.
If you’re an avid wildlife spotter or birdwatcher, a few days exploring Tayrona’s hiking trails is a must. It’s home to a tiny primate called the cotton-topped tamarin, as well as howler monkeys, sloths, iguanas and poison dart frogs.
However, beauty has a downside. Tayrona can suffer from overcrowding, especially in the peak December-January tourist season. A sacred site to the indigenous Kogi people, Tayrona needs protection. To help the local environment recover, the park often closes for weeks directly after the peak season. 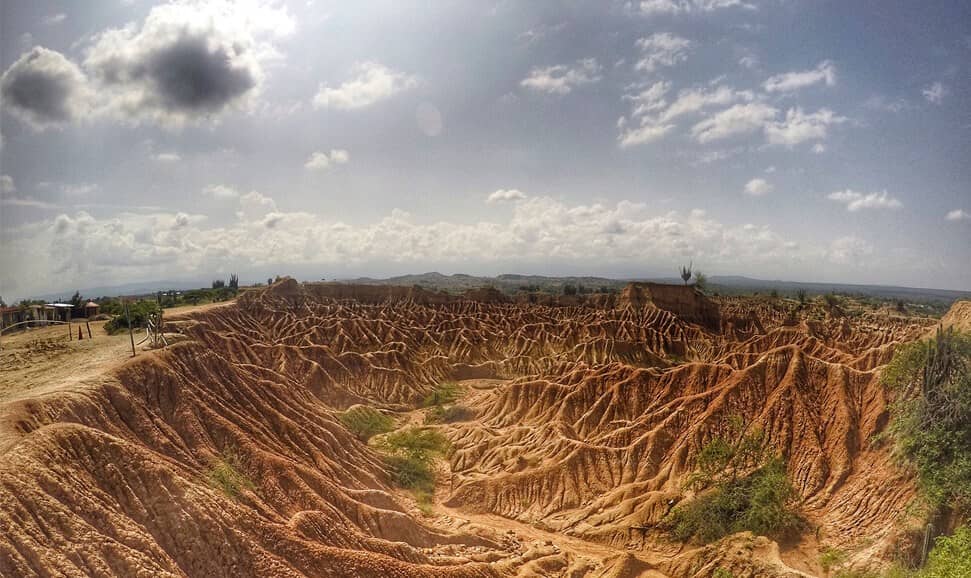 Between Bogota and San Agustin is one of Colombia’s most surreal natural wonders. Desierto de la Tatacoa is a rugged, scorching badland. Its dry, rocky canyons form a labyrinth of eroded red cliffs and gullies. Bizarre, towering rock formations punctuate the arid landscape, which appears hauntingly void of life apart from the occasional giant cactus.
Once the hot desert sun has set, Tatacoa becomes an amazing stargazing destination. In this part of the country, there is little to no light pollution, so on clear nights, an astonishing number of stars are made dazzlingly visible. Home to an astronomical observatory, at 6:30 pm each night, you’ll have the opportunity to see the stars through a high powered telescope, with the local astronomer on hand to point out the constellations. 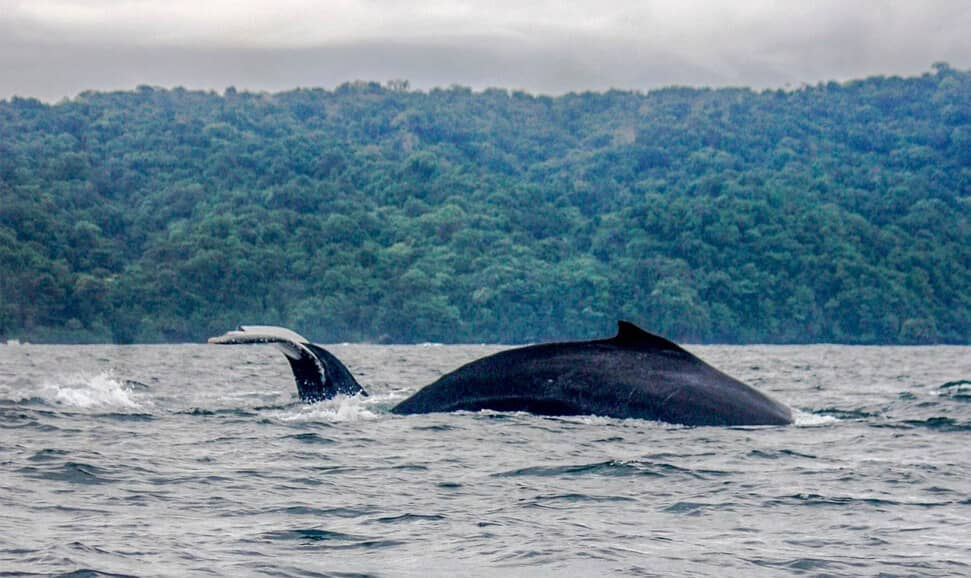 Beach vacations in Colombia are synonymous with the Carribean, but Colombia (the only South American country with both Atlantic and Pacific Ocean coastline) has an entire, separate and largely-forgotten coast lapping at its western shores. The Pacific Coast of Colombia extends for 1,392 km, with the Chocó department claiming the longest stretch of seafront.
This is one of the least developed regions in Colombia, the complete opposite of the manicured attractiveness and tame beaches of the Carribean resorts. In Chocó, where the sand ends, the jungle begins. Deep inside the rainforest, waterfalls stream over mossy ledges to crash into wild rivers below. Thermal pools, hidden sanctuaries in the jungle, wait to be discovered by only the most intrepid and foot-sure adventurers. Most settlements on the Chocó coast, tiny fishing villages are isolated and poor. A lack of infrastructure makes travel here a fairly challenging prospect.
Still, modest steps are being made towards lifting-up the region’s economy through eco-tourism. The wild waves of the rugged Chocó coast harbour epic secret surf breaks. The region too, is rich in wildlife – most notably dolphins, turtles and the humpback whales who hug the Colombian coastline on their yearly migration. Whales can often be spotted from shore, but for an up close encounter, head out on a boat tour during the June to October whale watching season.

7. The Sand Dunes of La Guajira 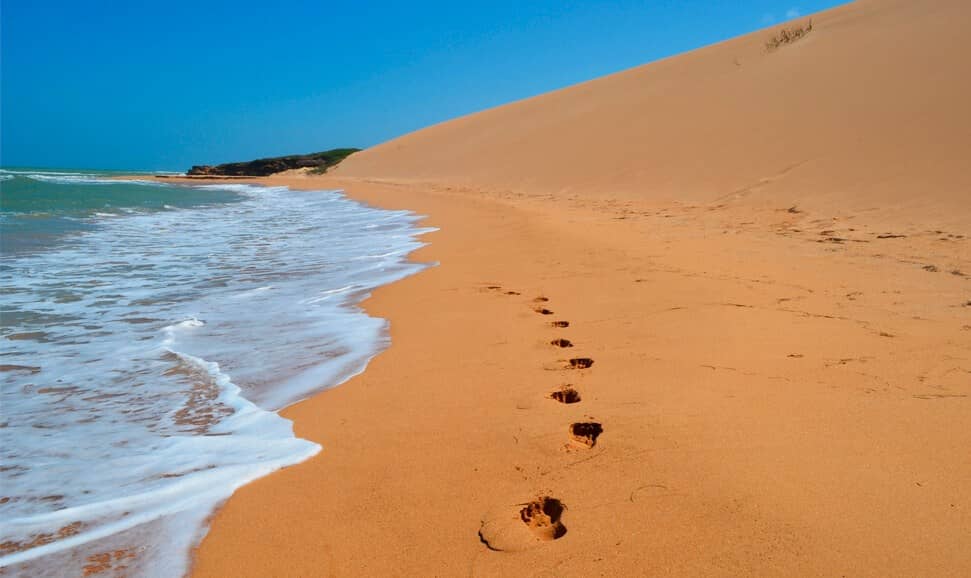 There is no place remotely like La Guajira, a tiny coastal region on the northernmost tip of Colombia, where the desert touches the Caribbean Sea. The arid landscapes of La Guajira have a desolate, almost alien beauty – cracked yellow earth, straggly clumps of cactus and tiny settlements of tin and thatched roof houses.
And then, the parched, hard earth of the plains gives way to a vast expanse of windswept sand, whose edges plummet precipitously into the crashing waves of the Atlantic below. Standing atop one of these towering dunes, you’ll find yourself gazing in wonder over the blue waters of the Caribbean and the red cliffs of the Guajira desert. This the land of the nomadic Wayuu people. The Spanish never succeeded in conquering this harsh environment and to this day, the Wayuu have managed to maintain a large part of their traditional lifestyle and culture. 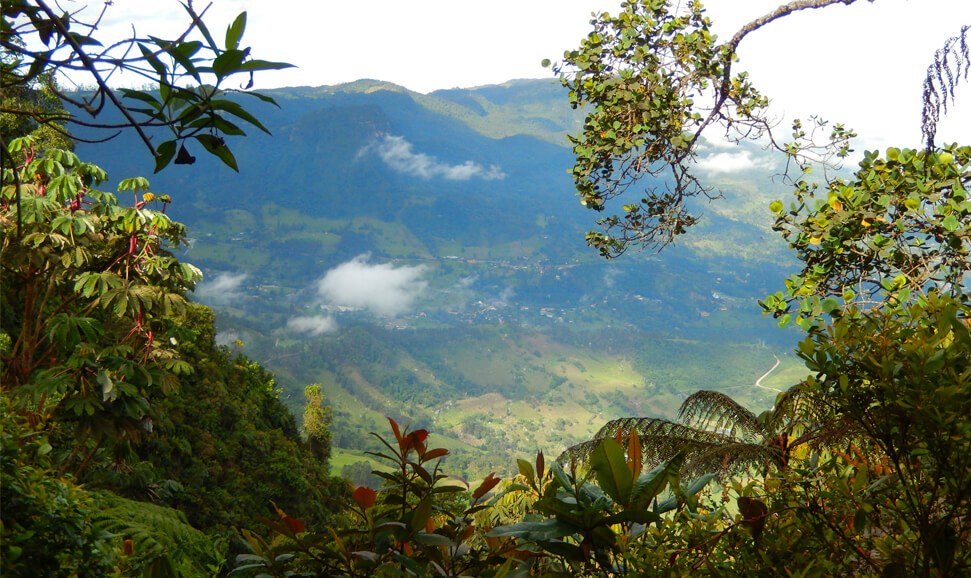 The cloud forests of Chicaque remains an untouched wilderness, despite being just 30 minutes south of the crowded capital of Bogota. Well and truly in the clouds, at around 2,700m above sea level, the protected private reserve boasts some of the most magical forest scenery anywhere in Colombia. Some 300 bird species call Chicaque home, as do a dozen different mammals, including the two-toed sloth and spectacled bear.
An amazing ecotourism destination, Chicaque features miles of magnificent hiking trails, varied accommodation and numerous activities. Inside the park are nine well-marked ecological trails. It also offers a canopy walk at the top of a 200 year old oak tree, ziplines, horseback riding and guided birdwatching tours.

JOIN Us in Colombia

RIDER-IN-CHIEF - A Dane who has traveled overland in over 100 countries and finished the Intercontinental Rally from Spain to Dakar twice. An 8 month solo motorcycle trip brought him to Colombia. Mike was blown away by the country, its people and its many adventures. He found true love and is now married to Diana Puerto and the couple have three daughters. Full story: http://www.dakarracer.com