There’s no doubt about it, Colombia has arrived on the global tourism stage in a big way. It’s not just an improved international perspective on safety that’s led to Colombia’s rise as one of the world’s fastest growing tourism destinations. Back in 2008, the Colombian tourism board ran a series of ads touting the country’s cultural, historical and natural wonders.

While many travellers are familiar with Colombia’s cities – the charmingly colonial Cartagena, the stately metropolis of Bogota and the buzzing urban playground of Medellin, it’s Colombia’s still largely undiscovered natural wonders that are perhaps its most valuable tourism assets.

One Nation – Dozens of Unique Ecosystems

Biodiversity refers to the variety of and variability of plants, animals and other lifeforms in a given region.

If you were to guess which country claims the title of ‘Most Biodiverse’, and immediately thought of Brazil (the country whose borders contain the majority of the Amazon Rainforest), well, you’d be right.

What far fewer people realise is the country coming in a close second for biodiversity lies right across the Brazilian border. Neighbouring Colombia is home to a confirmed 1,845 species of bird – more than anywhere else on the planet. Colombia is second in variety of plant species, amphibians, butterflies and freshwater fish, third in reptiles and fourth globally in biodiversity of mammals. One in every 10 species of living flora and fauna on record can be found in Colombia.

So how is a country around seven times smaller than Brazil almost comparable in terms of biodiversity? A quick glance at a map yields a compelling explanation. 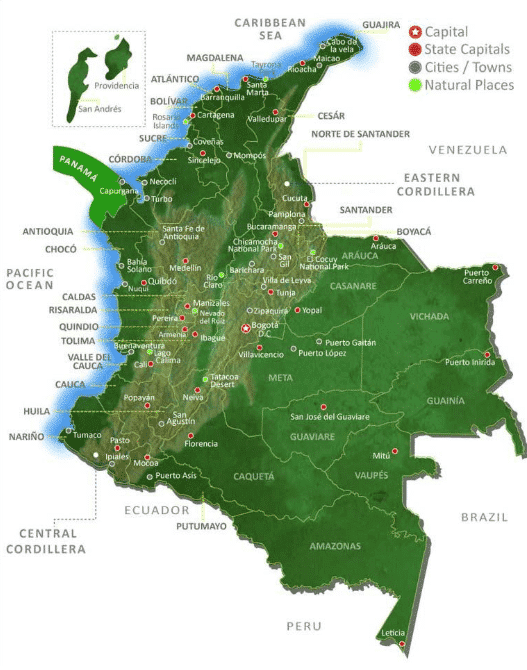 Fringed by the Pacific Ocean and the Caribbean Sea, with an inland border cutting through the Amazon Rainforest, Colombia is carved into several distinct regions by the Andean mountain ranges. Within the country are 53 million hectares of forest and 22 million hectares of savannas, arid zones, wetlands and snow-capped mountain peaks. Its coasts are home to tropical coral reefs, lagoons, mangroves and jungle-flanked beaches. Fourteen per cent of the country is comprised of protected national parks, natural parks and sanctuaries.

Why Biodiversity is the Key to Colombia’s Tourism Future

Many of Colombia’s least developed areas – the Amazon regions, the Pacific Choco region, and the eastern plains – are also among its most biodiverse. Unfortunately, the biodiversity of these regions is under pressure from industry (particularly mining and deforestation), causing the destruction of wild habitats and disrupting the natural balance of sensitive ecosystems.

There’s little doubt the most remote communities in Colombia are in need of infrastructure, funding and employment opportunities. Now, environmental groups in Colombia are pushing for these regions to embrace their biodiversity and support ecotourism initiatives that help protect diversity rather than industries which contribute to its destruction. With ecotourism among the fastest growing tourism sectors in the world, Colombia is perfectly positioned to take advantage of the boom and conserve its precious environmental resources at the same time.

Possibly the most iconic natural wonder in Colombia, Caño Cristales (known as ‘the River of Five Colours’) is the name given to the Guayabero River tributary, which due to a unique phenomenon caused by the brightly coloured blooms of an aquatic plant called macarenia clavigera, becomes a shimmering rainbow of vibrant colours between June and December each year. While bright pink is the most common colour, the river’s shallow, crystalline waters run with a variety of hues including blue, green, yellow and orange. Outside the season, the park is closed to visitors to allow the surrounding environment to recuperate, and eco protection rules are strictly enforced including mandatory guides, a cap of 200 visitors per day, a ban on sun screen and insect repellent when visiting the water and limited areas where swimming is permitted.

Motolombia visits Caño Cristales once a year on the epic River of the Gods guided off-road expedition, giving you an entirely unique perspective of the park’s ruggedness and isolation beyond the standard tourist trail.

Less than half a day’s ride from Bogota, this enormous National Park makes for both an accessible and challenging expedition through a range of unique Andean ecosystems. Ranging in altitude from 800m to 4,000m, the park encompasses vast swathes of silent paramo wetlands, alpine woodlands and snow-capped mountain ranges. Guided multi-day hikes provide you with the chance to observe rare wildlife such as the jaguar, puma, woolly monkey, mountain tapir and spectacled bear.

Well off the beaten path, Los Llanos is an area of vast tropical grassland spanning north western Colombia and southern Venezuela. For wildlife enthusiasts, Llanos is perhaps the most productive region in the country for up-close encounters with animal inhabitants including anteaters, anacondas, jaguars, capybaras, caiman, armadillos, capuchins, howler monkeys and ocelots. It’s a veritable birder’s paradise, supporting thriving populations of waterfowl, macaws and birds of prey. The immense size and relative inaccessibility of Los Llanos mean guided excursions are the best way to explore this environmentally and cultural unique Colombian region. Just a few eco-conscious operators organise wildlife and birdwatching focused trips out of the regional capital of Yopal, a 40-minute flight from Bogota.