When it comes to motorcycle travel, this enigmatic and hugely varied continent has it all. [...]

I love discovering a new country by motorcycle for many reasons. Among them, the fact that the flexible nature of bike touring allows you to duck into that dicey looking highway diner that caught your eye 200 metres back. You know, the one the tour bus just sped right past. A motorcycle provides the ideal vehicle for undertaking a cross-country culinary expedition.

Get hungry on the approach to a random town in rural Colombia, and wherever you pull in, it won’t be an air-conditioned coffee chain, or anywhere with English speaking staff or Israeli salad on the menu.

Whenever we’ve been riding in the heat, dirt and mud for hours, I get a little buzz when the first sign of civilization appearing on the horizon is a hand drawn sign for a rambling, roadside eat shack, where crew-line cooked meals are efficiently dished out to truck drivers, seasonal labourers, lost tourists and day tripping school kids.

Colombian food is difficult to generalise or judge as a whole, thanks to its wildly varying geography. Within its borders almost every ecosystem on earth can be found. From the Caribbean reefs to the Amazon jungle, the Andean cloud forests and the tropical plains, the sheer variety of produce grown in Colombia is mind-boggling.

Add to the mix at least 10,000 years of indigenous inhabitation, the legacy of the Spanish, the Africans and Colombia’s influential Latin American neighbours, and you have a cuisine that’s deeply connected to land, history, culture, access and ancestry.

It’s no surprise then that Colombian food varies massively from region to region. As you ride through Colombia, every time the landscape changes dramatically, you can reasonably assume the food situation has too.

This guide is by no means exhaustive, but it might give you an idea of what to expect as you travel and taste your way through different parts of Colombia.

No idea what to order? Trust in the menu del dia – the road warrior’s bargain-priced mystery meal of choice. No one place makes it the same. 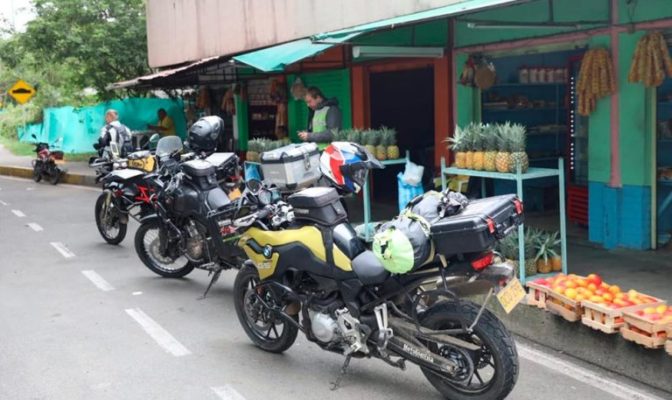 Colombia’s Caribbean coast is blessed with a colourful bounty of tasty things from down in the sea and up in the trees. A visit to a Caribbean produce market is a must – you’re guaranteed to not recognise half of everything in the fruit section, while finding almost all of it delicious.

Cartagena was the most important Spanish trading port for both goods and slaves, so here, indigenous ingredients eventually began to merge with Spanish and African influence. These days, Cartagena has swapped the slave trade for the tourist one, and as a result, it’s home to some of Colombia’s best, and most expensive high-end international restaurants.

Coconut and seafood are common pairing. A simple grilled snapper on coconut rice is hard to beat, but a worthy challenger is cazuela de mariscos, a Creole-style seafood soup, with hearty bits of fish and shellfish swimming in a creamy coconut milk broth. Along buzzing beach strips, palanqueras (fruit sellers, usually older women) balance baskets on their heads, heavy with mango, guava, pineapple and more exotic offerings like pitaya (yellow dragon fruit) and nispero (like a small apricot in appearance, with sweet, tart flesh).

Boyacá Department is in Colombia’s east central Andean region. Many of Colombia’s major rivers originate in the lowlands of Boyacá, which support wide expanses of fertile farmland.

Much of Boyacá’s produce is sold directly to the eight million residents of its capital, Bogota, which is also home to Colombia’s most celebrated chefs and awarded eateries. Chefs who purport to honour Boyacá’s culinary traditions have the task of prettying up rather simple farmhouse fare. Their secret? Using ultra-fresh, high quality local produce, making inventive meals out of hearty, carb-filled, cool climate stodge. Beef, chicken, corn and potato are staples.

The region’s best-known dish, ajiaco is a soup made of three kinds of potatoes with varying textures. Corn and herbs are added, and you’ll usually find a leg or other bits of chicken thrown in. Other fixings are optional, but could include capers, cream, avocado or rice.

Corn is considered acceptable in desserts in Boyacá, particularly when it’s mixed with milk (hot or cold) and panela (whole cane sugar) or honey.

Colombia’s verdant central Andean region is where some of the world’s finest coffee is grown, harvested and almost entirely shipped overseas to be enjoyed by millions of non-Colombian cafe aficionados.

I joke. But not really. Colombian coffee culture is surprisingly niche, and one of the few places you can get a guaranteed decent pintado (roughly equivalent to a flat white) is at a coffee finca in the Zona Cafetera. A more popular warm drink is agua de panela, literally brown cane sugar in hot water (sometimes with coffee added). Other crops include avocados, bananas, citrus, pineapple and cocoa.

The region’s lush valleys are criss-crossed with creeks and streams, which is why you’ll see river trout (truta) on almost every menu, prepared in an endless variety of ways – wood-grilled, whole-smoked, topped with herbs, breadcrumbs and cheese or slathered in creamy mushroom sauce.

Antioquia department proudly claims to have invented the bandeja paisa. This overdose on a plate is almost entirely bloat-inducing carbs and glisteningly visible trans fats in the form of chicharron, chorizo, ground beef, fried eggs, plantains, avocado and arepa. Finish a whole one at your peril. 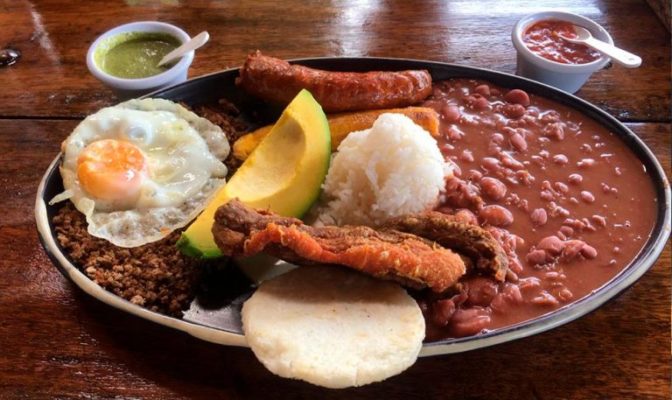 Here’s a hot foodie tip for you: the place where they make the best food in Colombia is not the one with all the swanky interior architecture and the fancy foreign-trained chefs.

There are no Michelin-starred restaurants on the country’s surf-battered western coast, and there are none in the major city of Cali, just 30 minutes inland.

If there’s one thing most Colombian food lacks, it’s chilli and spice. Not hot enough? Come to this steamy slice of the country and eat your words with a side of sizzling habanero salsa. The Pacifico has Colombia’s largest African-descendent population, and their culinary traditions, mixed with the maritime bounty of the Pacific Ocean, have created a foodscape unlike anywhere else in Colombia.

Los Llanos, “the plains” are the massive swathes of grassland and wetlands in Colombia’s east, bordering Venezuela. This is cowboy country, where the best beef in Colombia is bred, butchered and barbecued, often on long metal skewers over a wood fire pit. Llaneros don’t just eat beef however. Sometimes they eat pork.

Boiled yuca (cassava) and potato are your typical sides, and to spice things up, add generous splashings of aji (a salsa of fresh tomatoes, lime, garlic and chilli) on everything.

RENT A MOTORCYCLE IN COLOMBIA