Planning a motorcycle tour in Colombia?

There really is no better way to escape the chaos of the cities than saddling up and hitting the highway, forging onward as the traffic dwindles and then finally disappears, and empty roads open up before you, inviting a world of endless possible adventures. Of course, not all of us can afford to ride without plan or purpose. You’ll most likely want to map out the majority of your route, including picking out your stopovers, many of which will end up being small towns. In truth, many of Colombia’s small towns have little to offer besides a cheap feed and a bed for the night. On the other hand, there are some truly delightful rural pueblos and small towns which make worthy destinations in their own right.

The 10 villages on this list were picked for their aesthetic appeal and inviting, small town atmosphere. So, start planning your dream ride and be sure to visit at least a few of Colombia’s 10 Most Beautiful Small Towns.

Barichara (population 7,063) was an obvious choice for the top spot. Immensely atmospheric and visually stunning, the laidback charms of Barichara are apparent the second you set foot on its cobblestone streets. A compact colonial hillside town, Barichara sits atop a plateau overlooking the Suarez River canyon. The steep, narrow streets are lined with whitewashed, terracotta-roofed homes, and the further up you climb, the more the views of the surrounding valley intensify. Although Barichara has its share of fancy boutique hotels, it doesn’t feel like a tourist trap. Life moves at a leisurely pace, the locals are genuinely welcoming, and once the day-trippers are gone, evenings in the plaza are serene and romantic.

Barichara is 20km from the adventure tourist mecca of San Gil and 118km from the state capital, Bucaramanga. 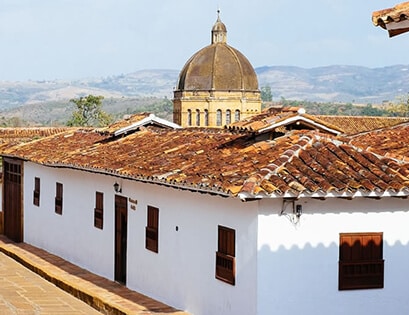 A lovely, unassuming gem couched in the emerald green hills of Antioquia, Jardin (population 14,777) is among the most visually alluring townships in the Zona Cafetera, or Coffee Triangle. With brightly painted buildings, a lively plaza perfect for people watching and plenty to see and do in the surrounding countryside, Jardin is slowly attracting a trickle of visitors straying from the gringo trail. The cable car ride to the Alto de las Flores mountain peak culminates in fantastic views Jardin’s verdant countryside.

133km south of Medellin, Jardin has enough to tempt you into several days’ stay, with excursions to nearby coffee farms, waterfalls and prime birdwatching habitats.

Another overlooked town in the Zona Cafetera, Jericó (population 12,100) is mainly visited by domestic pilgrims journeying to the hometown of Colombia’s first saint, Mother Laura Montoya. Religious significance aside, Jerico is quite possibly the most picture-perfect pueblo in Antioquia (and maybe even all of Colombia), its storybook-like appearance materialising out of the misty mountains, a village-scape of elaborate old churches and immaculate streets lined with Crayola-coloured houses and flower-draped balconies.

Don’t leave without hiking up Cerro Las Nubes for a soul-stirring view of the southern Antioquian mountain ranges.

Guatapé (population 5,600) is hardly a hidden secret, but as a contender for the most colourful town in Colombia, this curious little village on the shores of a massive man-made lake was bound for backpacker fame.

It’s almost impossible to pinpoint Guatape’s architecture to any particular time period. There’s a fantasy-like, Legoland quality to the block-shaped houses in meticulous, symmetrical rows, all hand-painted in bold colours and embellished with ornate frescoes (called ‘zocalos) depicting everything from family professions to forest creatures to favourite pop culture icons. Guatape’s primary attraction is the hike to the top of the nearby La Piedra Peñol, a 2,135m high monolith. 650 stairs criss-cross the bizarre-looking rock like a gigantic zipper. Reach the top and you’ll be rewarded with a rather stupendous view of the Guatape Reservoir’s meandering waterways and islands.

Coffee tourism has swept through to the Colombian countryside in a big way, but has so far passed right over Pijao (population 10,250), an impossibly pretty little town where life feels simpler, and visitors are sure to share a few cups of arabica brew with the irrepressibly welcoming locals.

Despite being relatively unknown to the outside world, Pijao was the first South American town to join the ‘Cittaslow’ or ‘slow city’ movement, a community-based movement focusing on sustainability and preserving cultural heritage. Pijao is well worth a detour for serious coffee enthusiasts, with some of the best plantation tours and finca homestays found in nearby countryside.

Largely intact colonial towns are somewhat of a rarity in Colombia, which makes Villa de Leyva (population 16,984) all the more enchanting. Founded in 1572, the entire town was declared a national monument in 1954 and has remained perfectly preserved ever since, with no modern architecture detracting from its beautifully whitewashed Spanish buildings.

The focal point of the town is the Plaza Mayor. 14,000 square metres wide and completely covered in cobblestone, the largest square in Colombia is a stunning sight, framed by immaculate 16th century mansions.

Curiously, one of Villa de Leyva’s most visited attractions is not from the colonial period at all. The vaguely Gaudi-inspired Casa Terracotta just outside town is a whimsical, wonky construction made entirely from clay.

160km from Bogota, Villa de Leyva is a popular weekend escape from the city.

Salamina (population 18,740) is a quaint coffee country town. For now, it remains unconcerned with catering to the whims of tourists and is just happy to be itself – a sleepy, deeply traditional town which just happens to boast some of the most beautiful heritage architecture of any Colombian pueblo. Coffee growers who struck wealth in the early days decorated their homes with elaborate woodwork, embellishing the doorways, balconies and window frames that give Salamina its distinctive aesthetic.

The main landmark is the all-white church, an ivory tower looming large over Salamina’s pastel-hued homes and colourful plaza.

Hot travel tip – the giant wax palms of the Valle del Cocora, Salento’s most famous tourist attraction, also grow prolifically in a valley near the village of San Felix. About 30km outside of Salamina, here you have a good chance of having the company of the trees entirely to yourself.

Once a thriving port town, plonked on an island in the middle of the mighty Rio Magdalena, when the trading boom came to an end in the 19th century, Mompox seemed to simply become trapped in time, forgotten by the outside world for generations. Much of Mompox has changed little since the colonial days. It was granted World Heritage protection in 1995.

Today, Mompox is experiencing a second wave of prosperity, as tourists from Cartagena (136km to the south east) flock to stroll the nostalgia-laden stone streets of a town that resembles a Hollywood period film set, or Gabriel García Márquez’ magical, make-believe settlement of Macondo. A few of the riverside merchant mansions have been converted into bars and boutique hotels, while the silversmith workshops along Calle Real del Medio are an atmospheric highlight.

Sitting at a breathtaking 2,900m above sea level, Monguí (population 5,000) is an idyllic highland pueblo. Built on the side of a mountain, practically every corner of the town has panoramic views of the valley below. A 17th century Franciscan monastery dominates the plaza, where local farmers in their ruanas (traditional woollen ponchos) congregate to sell fresh produce. The 17th century Calicanto Bridge is watercolour-painting-picturesque, constructed from a concoction of clay, lime and bull’s blood.

The 20km road from Sogamoso is a ascends steeply through truly beautiful mountain scenery. Mongui is also a great base for exploring the surrounding paramo (Andean tundra landscape).

La Playa de Belen (population 8,546) is a squeaky clean village with just a few streets leading to a miniature plaza dominated by the two white towers and golden domes of the San Jose church. Everything in the village – the houses, streets, sidewalks and even the potted wall plants decorating the sides of buildings – have been perfectly planned and pristinely maintained. What makes Playa truly remarkable is its otherworldly setting in a valley surrounded by undulating, weathered rock formations.

Just a few minutes outside of town is the incredible Los Estoraques Unique Natural Area, a geological wonder made up of rugged rows of erosion-worn brownstone pedestals and columns.

The 269km route from Mompox to La Playa through dry canyons and lush river valleys is one of the most spectacular rides in northern Colombia. 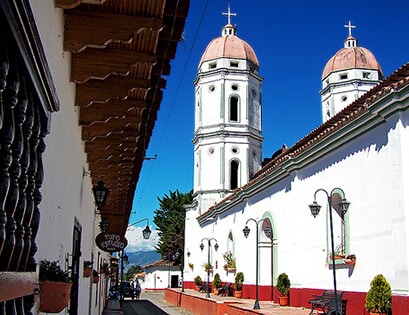 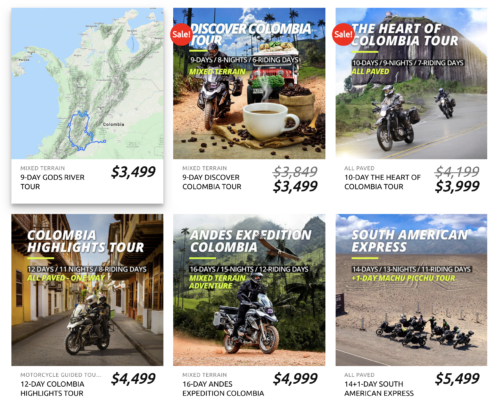